I have been going here on and off for 3 years, and today was the first time I was lied to, overcharged, and insulted/offended by the manager of this place. My mother recently died, and I went in and showed the manager a picture of a design I would like done on Tuesday. I explained that I'm going to my mom's funeral and could her techs do the design. She assured me one of her best nail techs could do it no problem. I made the appointment for today, found out the cost and all was scheduled. I was 10 minutes late due to traffic. called twice before to confirm to still come. When I got there, I was told to wait....I waited 15 minutes. When I mentioned I was on a tight schedule, they said ok, and I had to wait another 10 minutes. The girl who did my nails wasn't listening to me when I told her I wanted my nails cut short. I had to repeat it more than 3 times. Some of them were shaped slanted. When I mentioned that, she really didn't shape them to straighten them out. Then she cut one finger so short, it made it bleed. I had to say something about that.
Then when she added the color, she put on the wrong base color. And I told her this. She ignored me. She did a bad job and I made it known that didn't look like the design and I wasn't happy. So the manager came over and tried to tell me that it will look like the picture, but it didn't. Then she suggested to not do that design and try something else. I suggested placing crystals along the base of my nail bed. She didn't do what I wanted, again....she told me my nailed was too fat and to just do one big crystal and two smaller ones on each side. At that point I was upset and got quiet. I told her I wasn't happy. She tried to assure me that it looked great and that nobody can do my design exactly like the picture. I told her my daughter's nail shop does, and then she tried to justify not doing it because my nails were too short and too wide. I told her the nails in the picture were as short as mine and that wasn't true. Then she tried to charge me more money after she already quoted me a price for the alternate design change. I then raised my voice and let it be know that I was NEVER coming back
She then lowered the price, told me to be happy and my nails look great..... I left in tears.
Be honest with their customers, and stop being rude and disrespectful too.

Our environment encourages mental relaxation at every price, so forget your troubles with our soothing spa music and journey into a world of indulgence. 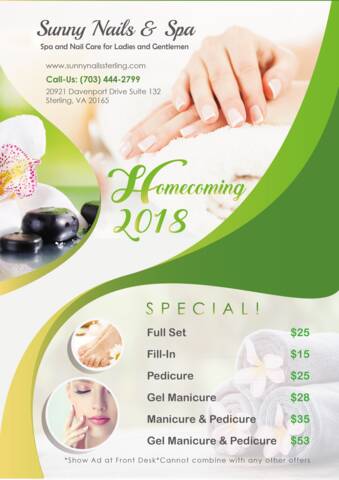 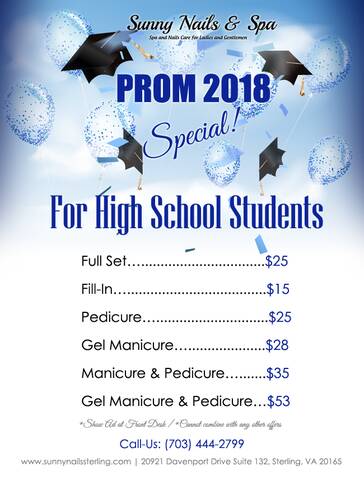 Welcome to Sunny Nails & Spa where your comfort and safety are out top priority. We are here to help you capture tranquillity while enhancing your natural beauty. With that in mind, we have created a serene, relaxing, and fun at atmosphere that cares for the total you. Our client’s health and safety is our top priority with the use of innovative pipe-less spa chairs and sterilized instruments. Excellent client service is out mission. We have highly trained technicians that continue to update their knowledge and expertise from industry experts to provide full service with the newest products.
Our environment encourages mental relaxation at every price, so forget your troubles with our soothing spa music and journey into a world of indulgence. We will do the rest.

Other Nail salons in Sterling (show all)

With over nineteen years of professional styling experience, Yvonne Rivera believes hair is the opportunity to define a person's true beauty.

Our concept provides a totally different approach to manicure & pedicure services. We care about our

Here at Sterling Nails & Beauty, we offer both the latest techniques and products in hopes of replicating that same experience of enlightenment and beauty

I di,d Change my number please